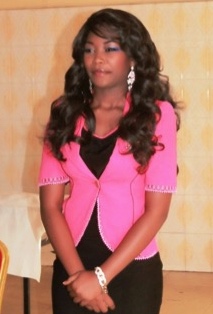 At CLI, we believe that the Congo is brimming with bright, talented, and passionate youth who hold the key to their country’s development. In this post, we’re going to spotlight just one of the young leaders we work with who will is already working to ensure that peace and prosperity flourish in the Congo.

Growing up in the Congo as a woman is rarely easy. It’s not difficult to see why considering the country’s alarmingly high levels of sexual and domestic violence (the World Bank estimated in 2011 that a woman is raped in the DRC every minute, which translates to 400,000 women per year), numerous federal laws that limit the autonomy of women, particularly within the organization of the family, and a host of socio-economic obstacles that prevent many women from accessing basic social welfare, such as education, clean water, healthcare, and accommodation. Yet this the world that Prisca, like over 40 million other women and girls, was born into.

Despite the obvious challenges facing her, Prisca was determined do more than her society expected of her and dreamt of becoming a manager or interpreter. When she was only 16 years old, though, the sudden passing of her father left her, her mother, and three siblings without much hope of making a better life for themselves. It’s for this reason that Prisca eventually jumped at the opportunity to join CLI in 2014.

Simply put, Prisca thrived at CLI. Empowered and inspired by the leadership and entrepreneurial training she received, Prisca began to realize how she could use her talents and abilities to not only advance herself professionally, but also contribute to the ongoing development of her home country. “Thanks to this, I have assumed many responsibilities at the University [of Kinshasa where I now attend], in my Church and I have even decided to work as a Volunteer Facilitator at CLI Kinshasa just to serve as a living example to all the talented young girls we have there,” she says. One of those responsibilities includes serving as the Editor-in-Chief of Publications at the university, with special attention given to the topics of leadership, entrepreneurship, and gender equality.

Today, at only 21 years old, Prisca is an inspiration to all as she breaks down the barriers she faces as a young woman and actively works to better her community and the Congo as a whole. Reflecting on her experiences at CLI and the potential that she sees in her country, Prisca says, “I believe that the development of the Congo is certain.”